Episode 001: The Importance of Socialization for your Pup – Transcript 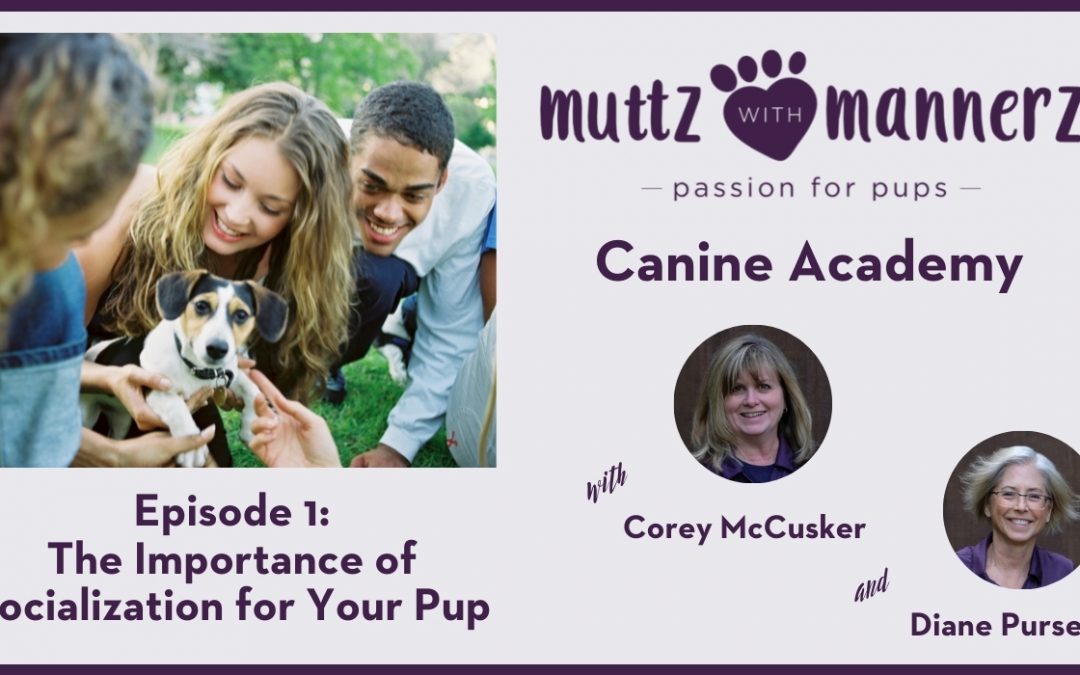 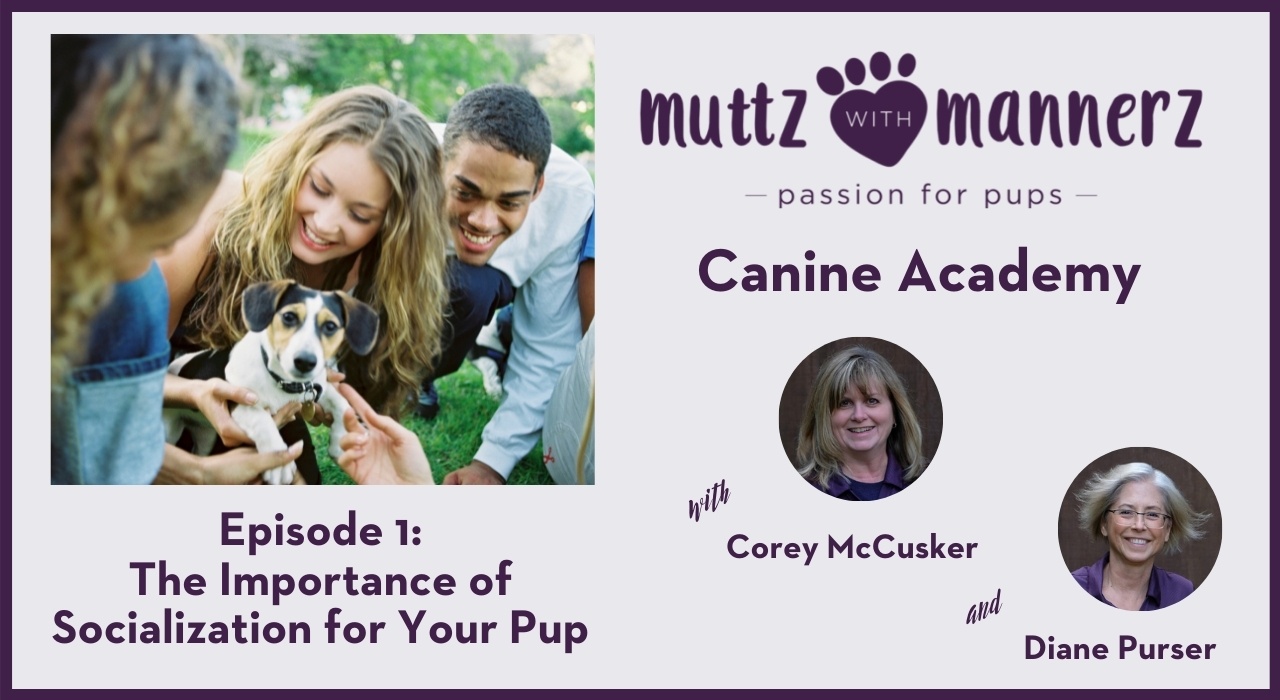 Corey McCusker  00:03
Hello dog lovers and welcome to Muttz with Mannerz, Canine Academy Podcast. I’m your host, Corey McCusker, Canine Coach, and I have along with me, Diane Purser, Canine Educator.

Diane Purser  00:15
Hi, everybody. Corey and I have a passion for pups, and we thank you for joining us today.

Corey McCusker  00:22
Today’s topic is the importance of socializing your new pup, one that’s very close to our hearts. And one we are so passionate about.

Diane Purser  00:31
Yes, you know, Corey, I just think this is so critical for new puppies. You’re setting them up for the rest of their lives. I think today, just to make sure everyone understands, we should talk about – ‘What do we mean by socialization?’, and also – ‘What happens if we don’t socialize them?’ And the impact on you and your family and the community.

Corey McCusker  00:57
At the end, we’re going to provide you with some great ideas that you can work with your pup at home. So let’s talk about how we set them up for success.

Diane Purser  01:08
Well, the very first thing I always think about is, I try to think about my pup. And the fact that they’ve just left the home they were born in, their mom, their littermates, that they’ve been with their first maybe eight to twelve weeks. They’re entering into a whole new world with new experiences, sights, sounds, smells, people – it could be very scary for them.

Corey McCusker  01:31
That’s so true. And we really want to prevent that fear, that scariness from all those things that they’re getting exposed to.

Diane Purser  01:38
You and I know, and we have a pretty good idea of how broad this topic is, but what’s the easiest way to talk about what socialization really means?

Diane Purser  02:07
Right. Build their confidence so that they can have a nice happy life with you. Usually you’re getting your pup, if it’s a puppy, somewhere between eight and twelve weeks, sometimes a little bit older. When exactly then should we make sure that we are starting this socialization process to make sure we get the best out of it?

Corey McCusker  02:29
The moment you bring them home. So when you pick them up from the breeder, the rescue, the shelter, wherever you’ve gotten them from, you really have to start that socialization. I want you to be aware that a young puppy’s brain is developing, and there’s a key time when we introduce them to new things. The brain fully develops around sixteen weeks. Which means if you’ve picked them up at eight weeks, you’ve really got a two-month period to really take an opportunity to expose them before their brain is fully developed.

Corey McCusker  03:02
And let’s talk about what we should expose them to.

Diane Purser  03:05
Well, you know, if we look at just big categories, there’s all kinds of things underneath each one of them. But people – the different sizes, types of people, male, female, all those kinds of things to think about. Animals – not just another dog that they’re going to meet on the street, because they come in all different kinds of breeds and sizes and ages and and levels of activity, but also squirrels and cats and birds, all the things that catch their attention. Or what about objects? We forget about things like they’ve never seen a skateboard or seen a car whiz by. Or maybe someone in the family is in a wheelchair or has a cane or a baby carriage. All new, all scary, potentially.

Corey McCusker  04:01
So, I think we need to talk about what happens if we don’t socialize them.

Diane Purser  04:06
What we need to do is understand what happens if we don’t socialize them. We don’t want this to be a scary process. But it is super important.

Corey McCusker  04:16
And I mentioned about the brain developing. Your window is really small. If your pup is not socialized before sixteen weeks, they can develop fear, and that means they could become overwhelmed with new people, dogs, experience . . . And the puppy’s communication is actually going to decline with the dogs that they’re meeting, or humans, when that socialization isn’t present. The fight or flight . . . If they do get fearful they could become aggressive, reactive or so timid, and even when you take them on a walk. That’s going to be difficult.

Diane Purser  04:49
Yes. We’ll talk about it in another podcast because it’s a complete topic on its own, but so important, is understanding how to introduce your dog or let people meet your dog when you’re out and about, because we want to make sure that we’re preventing dog bites. Even the best socialized dogs, you have to be mindful of how you meet them.

Corey McCusker  05:14
It’s so true. So let’s say we did get the opportunity to socialize, and what are the benefits when we do that?

Diane Purser  05:21
Well, the first and foremost is, we’re setting an amazing foundation for a good temperament. These pups, when they’ve been exposed to many things, it just means that they can deal with other new things that come into their life as it goes along. They have confidence, they’re friendly, and they’re easy to be around, or at least well mannered when they’re not comfortable about something. They’re not in a real fear situation.

Corey McCusker  05:49
They’re great ‘Muttz with Mannerz’. Great canines in the community, for sure.

Diane Purser  05:55
Exactly. So, why don’t we now spend more of our time on making a plan and then over to you on how to do this? Basically, step back, think about your lifestyle, think about what it is you like to do, how you live, and how much of that of you want your pup to do with you. Think about inside the home, everything that goes on. Everything outside the home, again, the car rides, going to the vet is going to be so important. The cottage, maybe, visiting people, taking them out for walks in the neighborhood and all the different things that they are going to experience out there. Make a huge list.

Corey McCusker  06:39
So true, that plan is key. And let’s talk about how we do introduce them to that new world. As a Canine Coach, I really want to make sure that you ease them into new situations slowly. You’re going to be exposing them to a lot. Really use encouragement, either treats to make them feel like that it is a positive experience, maybe a toy, for play, depending on what you’re doing, or even affection, just encouraging them to meet the new people or have those new exposures. Be really sensitive to what they are experiencing. And the one thing I want to make sure we don’t do is, we don’t want to force them into something. Because if we do, that’s when the fear can happen. You also want to make sure that if you are exposing them that you do have them on leash, because if they do get frightened and take off, you don’t want them to run into the road or who knows where they’re going to go. And really set up a training support team – I would say. Get people that are going to help you expose your dog, either to different friends and family members that look different – males, females, children – and make sure it’s really safe and friendly when you’re introducing them to them. And also short periods. Make it short and sweet. Really take a look at your dog and what’s the body language that they’re showing you? Are they crouching down – fearful?, Are their tails wagging? Are they looking excited to meet someone? So you’ve got to take everything into consideration and just really do it in a way – during those two months, if we’re looking at the eight to sixteen weeks, that you’re exposing them to really positive experiences and positive people.

Diane Purser  08:18
Exactly. Let’s make this a fun experience for everybody, and just offering lots of praise and support.

Corey McCusker  08:27
And I know we’ve just touched on a few things, Diane. So what I’d like to do is, we’ve got a tip list, a help sheet that you can download and it can be customized to you, but it will give you a lot more ideas. If you would like to learn more about us and Muttz with Mannerz, you can visit our website at muttzwithmannerz.com, for more information. Diane and I want to thank you for joining our episode today on puppy socialization, and it’s just one of the key things that we really want to encourage people to do in the right way so that you do have that well-mannered, confident pup in the community.

Corey McCusker  09:07
All right, and thanks, Diane, always great to talk with you. To learn more about us, please visit www.mutzwithmannerz.com. You’ll find blogs, other podcasts and information. If you have any questions or have ideas for future podcasts, you can email us at corey@muttzwithmannerz.com Thanks, everyone.

Return to the podcast episode