Episode 18: The Healing Power of Touch with Jesse McCowan 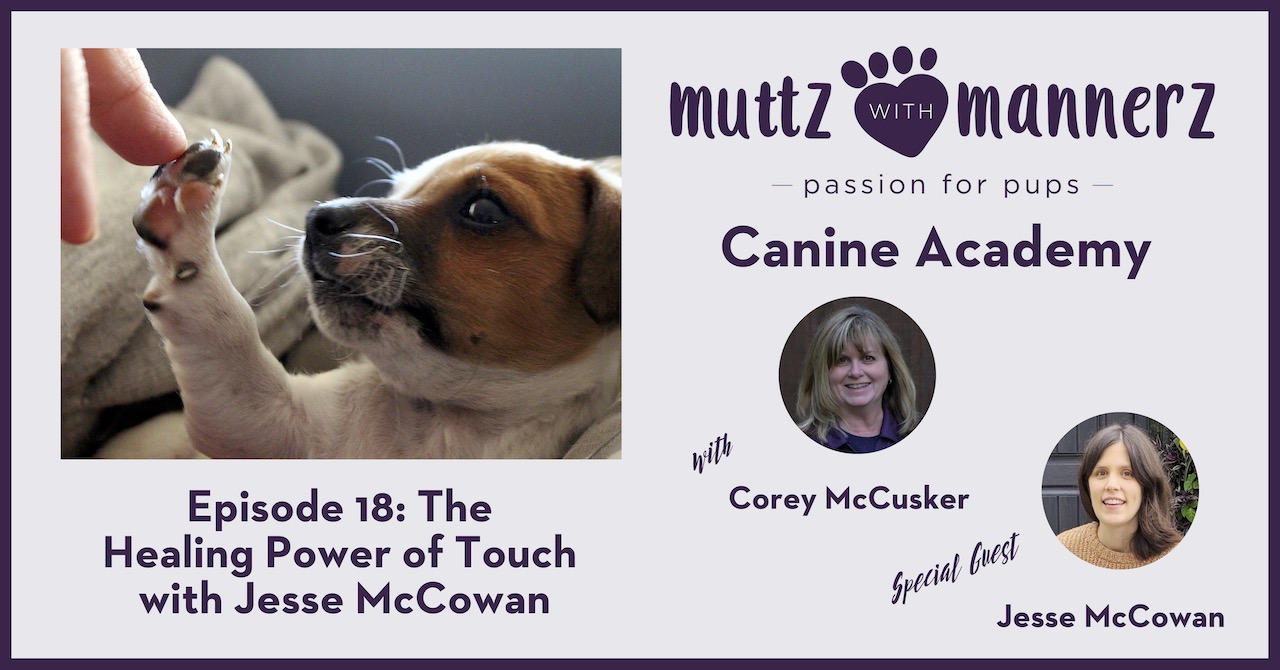 Have you tried holistic therapies to help your dog live its best quality of life? Things like Acupressure, Cold laser therapy, or even Iridology for pets?

In this Episode of the Muttz with Mannerz™ Canine Academy Podcast, host Corey McCusker interviews Jesse McCowan of Birch Animal Wellness. Corey and Jesse discuss her approach to some amazing holistic therapies that have helped many animals to have the highest quality of life possible.

Jesse uses a combination of her therapies with her clients to better approach both physical and behavioural imbalances. The therapies are gentle and non-invasive while allowing for dogs that are more nervous around people.

‘I decided to take that passion for animals and make my own career out of it because it’s actually not a very well-known field. And because I have so many different specializations, it’s more of a broad approach. So I can work with animals with different types of issues..’
– Jesse McCowan

Jesse’s love of animals started very young. She completed an Honours Bachelor of Science degree in Animal Behaviour and began getting certified in various therapies after that. Not only is she dual-certified in Animal Iridology, but also in Animal Acupressure.

In 2019 she became Canada’s first dual-certified Animal Acupressure Instructor, so she teaches both Small Animal classes and Equine classes. Shortly after, she became the Educational Director for Tallgrass North America which is a comprehensive online and hands-on Animal Acupressure program available globally.

Jesse uses a combination of her therapies with her clients to better approach both physical and behavioral imbalances. The therapies are gentle and non-invasive, while allowing for dogs that are more nervous around people.

Corey McCusker, Canine Coach
Corey’s passion for helping humans and dogs excel led her to take a leap of faith after 22 years working in the Financial Industry to leave her corporate job in 2006 and start two companies. Corey is a Coach at heart and works with business leaders and high-performance teams, but her true passion has always been canines. She now has created a career that supports both.

Corey founded Muttz with Mannerz in 2006. Her foundation of knowledge which includes being a Senior Manager, Dog Trainer, Vet Assistant, World Tour Lead, and Mental Performance Coach helped her to launch the Canine Academy. The purpose of the academy is to assist pet parents build the foundation for their pups to be with them for life.

Corey believes in giving back to the community. Over many years she has volunteered at the Toronto Humane Society and the OSPCA and is also proud to be an evaluator for St. John Ambulance Dog Therapy Program. She held the position of Director of Communications on the board for the Canadian Association for Women Entrepreneurs and Executives from 2017-2019. She has been active with Markham Fair and been a Team Captain and on the Executive for Stouffville Ladies Floor Hockey League for over 15 years.

Corey has made Stouffville her home for the last 18 years and shares it with Mike, her partner, two stepdaughters, Karla and Alison, and their two energetic kittens, Dino and Demi. Over the years Corey has been fortunate to be blessed to share her life with 6 wonderful canines, Tilley ( Miniature Dachshund), Tiny, Kira (Great Danes), Fred(Maltese), Charlie(Morkie), and Cleo(Miniature Poodle). Corey and Mike welcomed their new puppy, Skye, a rescue Muttz from Manitoba reserves into their home in June. 2021. They have big hopes for her and look forward to Skye filling their lives with joy and being an active member of Team Muttz.

Join Corey each month for the Women and Dog Circle Free Meetups you can register here >> https://www.seewhatshecando.com/women-and-dogs-circle

To read a transcript of this episode click here